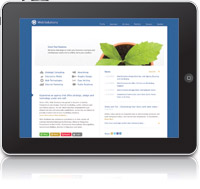 As a tie-in to the company’s recent outdoor marketing campaign, the contest asked participants to correctly relay the message on Web Solutions’ billboards around Hartford, Connecticut. After hundreds of entries were received, Joanne Samela, of Westport, took the highly sought-after prize in a random drawing held on June 7th.

“We have friends and clients all over New England and we wanted all of them to have an opportunity to win so we created a simple contest,” said Tom Barton, Web Solutions Principal. “We were able to generate a little buzz around our outdoor campaign and give away a cool prize to reward participants.”

"I was thrilled when I heard the wonderful news," said Samela. "It was icing on the cake after the wonderful and professional experience I had working with them."

For more information on Web Solutions or to stay on top of upcoming contests and opportunities to win, visit websolutions.com.